I’ve launched a new and ongoing project over at Instagram. Some early selections from the project are are also shown right here, listed under the Digital Media menu in the site navigation.

My artwork has often incorporated landscape as a reference and this body of work had a serendipitous origin in the practical business of using Google Earth to get a handle on unfamiliar geography. While using the application I experienced software lags that resulted in broken images, prompting reflection on the implications of Google’s representation of the world and ultimately leading me to a project of intentionally producing ‘wrong’ results.

Early on in using Google Earth as a medium I took a ‘neutral’ documentary approach, simply selecting, recording and displaying what I found, adhering to a rule of using only unaltered screenshots (no Photoshop or retouching). Since then, I’ve shifted my approach to using the screenshots as a basis of liberally (re)constructed landscapes that  question Google’s hegemony on how we conceive of “the world” while also creating a series of landscape clearings, openings to the unknown.

A central questions behind this work is who/what defines our experience of the place, space and landscape that we share? In Silence is a Commons Ivan Illich wrote “People called commons those parts of the environment for which customary law exacted specific forms of community respect. People called commons that part of the environment which lay beyond their own thresholds and outside of their own possessions, to which, however, they had recognized claims of usage, not to produce commodities but to provide . . . subsistence.” In the making of these images, closed territory is cracked open and reclaimed to support cultural production.

As possibly the largest public source of geo-spatial information and imagery, Google Earth provides an influential perspective on the world. It is the Google perspective. And like the technique of perspective that was invented in early 1400’s Europe it has been broadly adopted as one of our most advanced and “realistic” way of understanding the world by seeing, and it is indeed spectacular.

Google Earth intensifies, enriches and complicates fundamental issues that emerge from examining landscape – including the power resident in place and its representation. Google Earth street views combine a high tech world of platonic form (low-polygon geometry) with gestures to the airtight perfection of commercial architectural rendering. It’s an intersection that sometimes leads to a geographic uncanny valley, an already anxious space that’s further amplified in this project where, the strangeness of the images, sometimes vaguely extraterrestrial, can also belie how landscape becomes alien in ways other than appearances. Alien, from the Latin ‘alienus’, is rooted in the meaning of ‘belonging to another’ and, in legal practice, alienation means ‘the transfer of the ownership of property rights’ such as the taking of public parkland for non-park use.

In recent decades practitioners of human and cultural geography and eco-critique have laid to rest old ideas of nature and culture as an either/or proposition and highlighted human agency as key to any discussion of landscape. In his book Landscape and Power, W.J.T. Mitchell traces a history of landscape study that moves from contemplative to interpretive to instrumental – positing landscape as something that can act on us. If Mitchell is correct and landscape can exert agency what does it mean when our key reference for geographic information becomes a totalizing model of all landscape? Google’s mission is “to organize the world’s information” and Google Earth brings geodetic datum, satellite imagery and street photography into a massive convergence to present an experience of landscape and place as omniscient, first-person optical flow. When navigating the Google globe the initial thrill of the God’s-eye view, roaming and seeing remote places, can be tempered by an uneasiness prompted by implications of surveillance. For armchair travelers the sensation of using Google Earth can also be one that shifts from entertainment to containment as it gradually becomes clear that the dynamic but enforced perspectives offer little mobility beyond pre-determined paths of virtual tourism.

The forced failure of Google Earth creates a departure from the tours programmatic content as the default mode of surveying gives way to results that are unpredictable – alien. Breaking the boundaries of the cartographer’s virtual world leads to outcomes that are real discovery, not just re-presented territory. In the context of the Google world the views appear strange because they’re personal views of the landscape, different from the views authored/authorized by Google Earth. ‘Breaking’ Google Earth displaces the tour guide and allows travel into the unfamiliar – an act that is the definition of exploration. The virtual geography of Google’s controlled space opens to the psychogeography of the dérive – the unplanned journey.

Summer Residency and Installation at The Ragdale Foundation

Sheri Wills and I recently returned to New York after completing a collaborative residency at The Ragdale Foundation in Lake Forest, Illinois. It was an opportunity to define what collaboration means for us and to bring our thinking about our work into sharper focus.

Our pre-residency research questioned what constitutes nature and focused on the changing ecology of the Chicago area, a place whose transformation from prairie to urban environment has been marked by the disappearance of flora, fauna and culture that formerly defined this territory as part of “The Great West”. In part we looked to the writings of William Cronon, Professor of History at University of Wisconsin–Madison, as an early touchstone for our residency work, especially his books Nature’s Metropolis and Uncommon Ground.

Through continued reading and conversation, our approach evolved from an initial engagement with landscape as the sum of vanished and forgotten ecological features to a perspective that incorporates those concerns in human experience; the loss, obliteration, and erasure of cultural landscapes. As we reflected on what has disappeared into history, a deeper and more personal sense of urgency set in and the moral imperative of memory emerged; the need to acknowledge a complex landscape whose horizon ranges from generosity to dehumanization.

At the end of our residency we found that our work had, to some degree, turned outside-in – from the exterior ‘natural’ world to the places that lay within and between us, an entanglement of landscape, history and memory.

Below are a handful of images that show our work process at Ragdale.

Reclaiming material from a branch pile that has been set aside for an annual prairie burn. 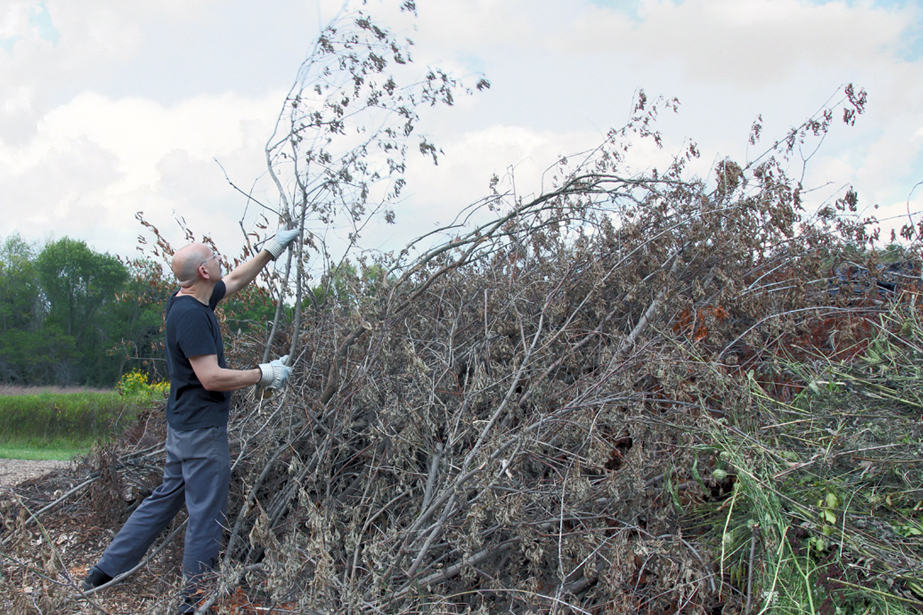 Constructing the scaffolding that will allow the installation to be built in place (suspended in space). 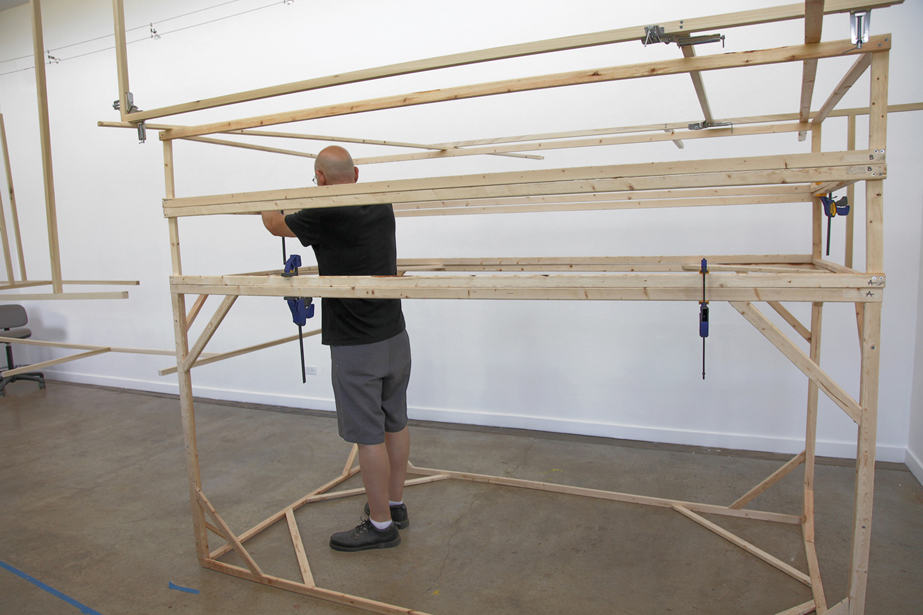 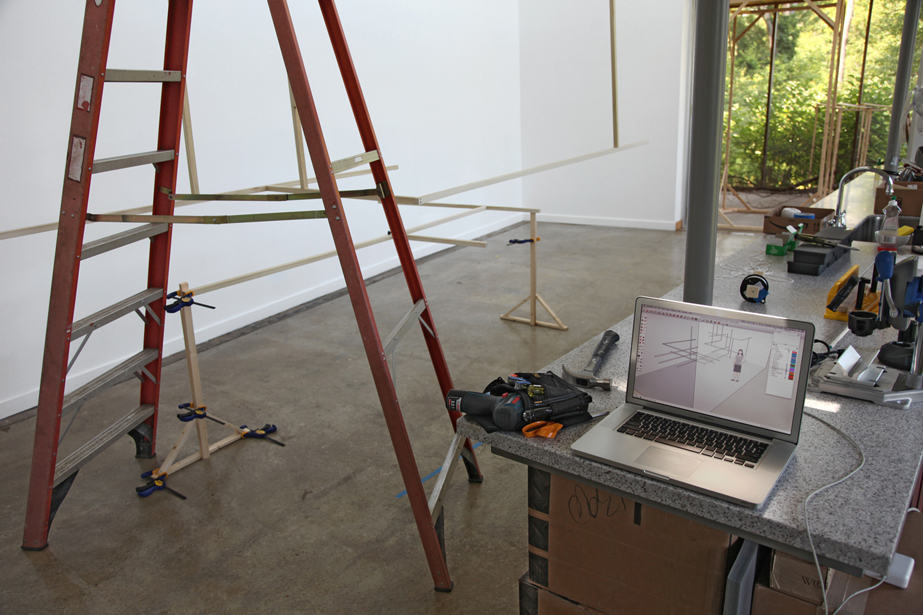 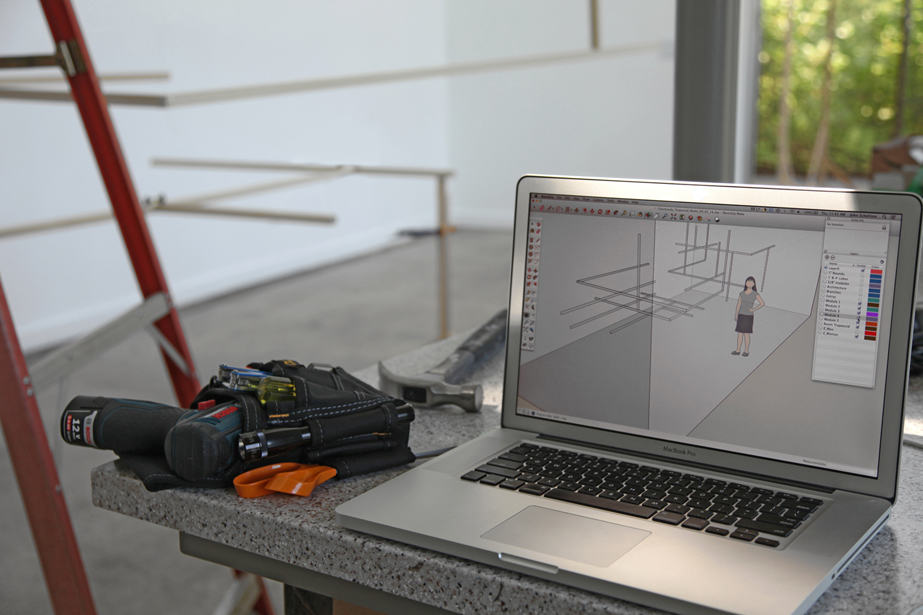 Editing the photographs that were compiled into the final video that was incorporated into the installation. 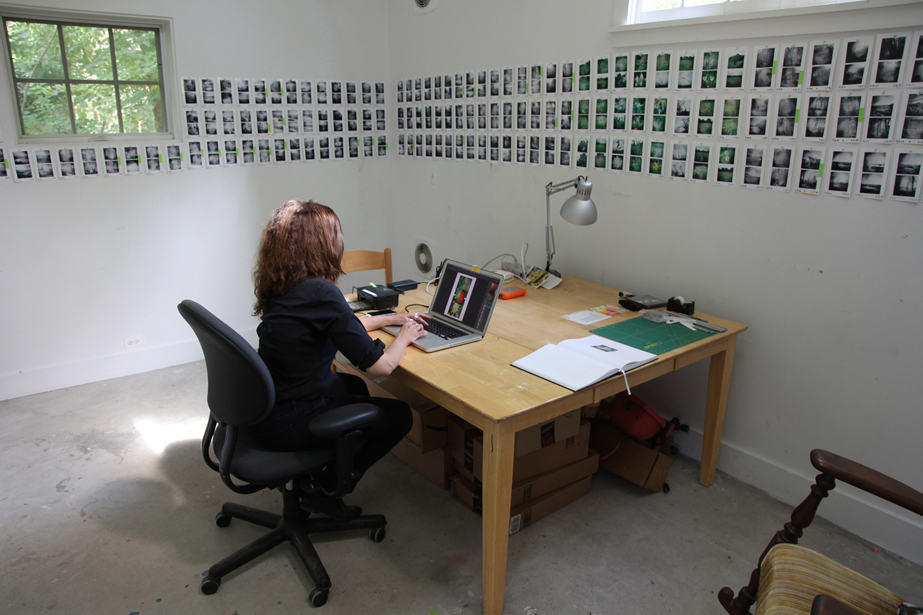 Selections from the thousand-plus images that were edited down into the video. 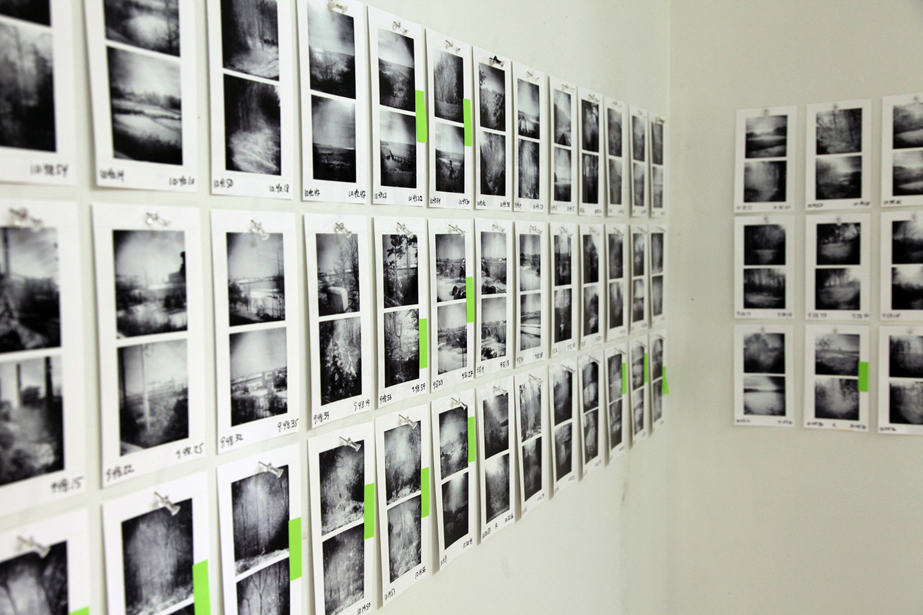 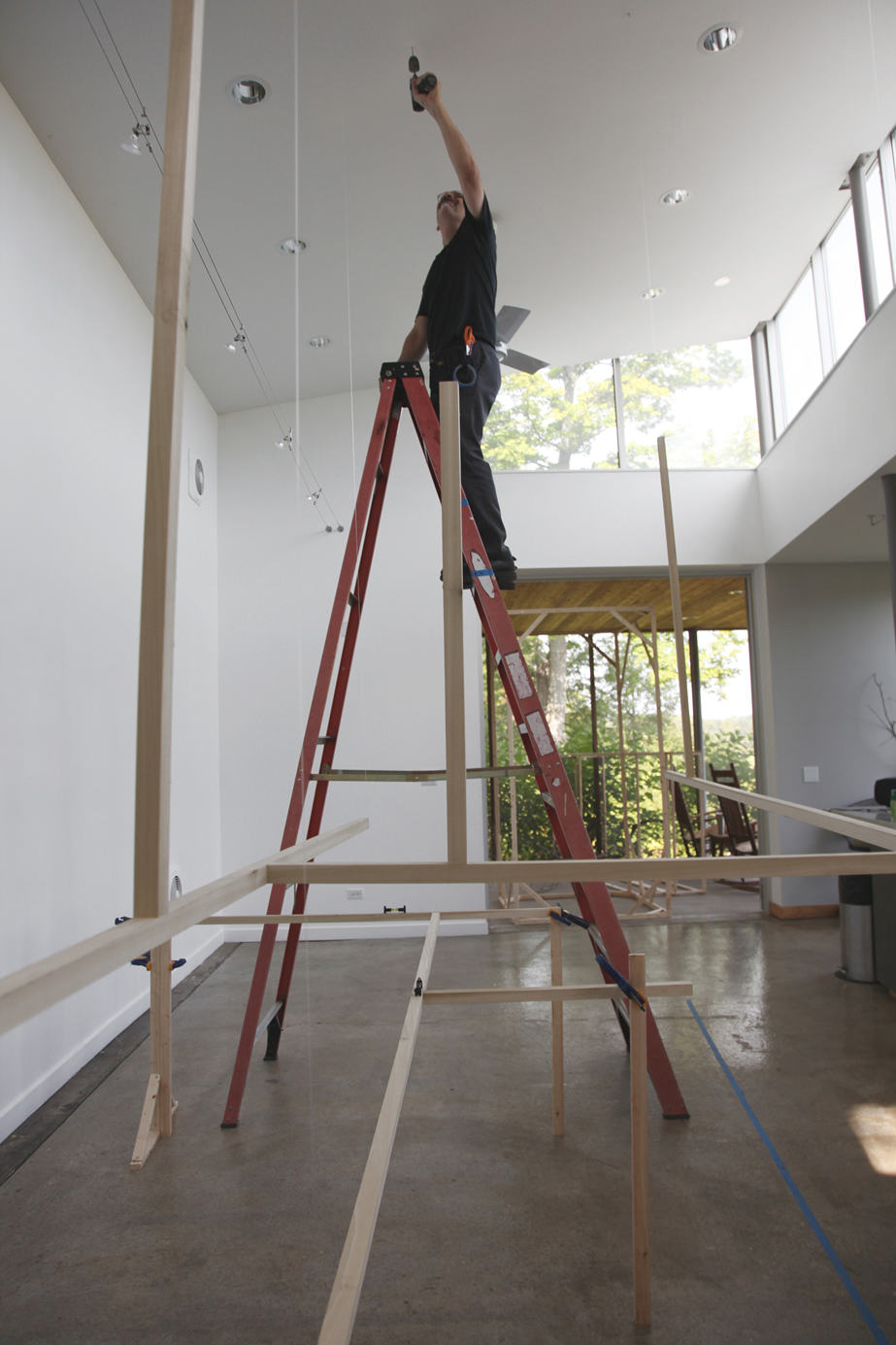 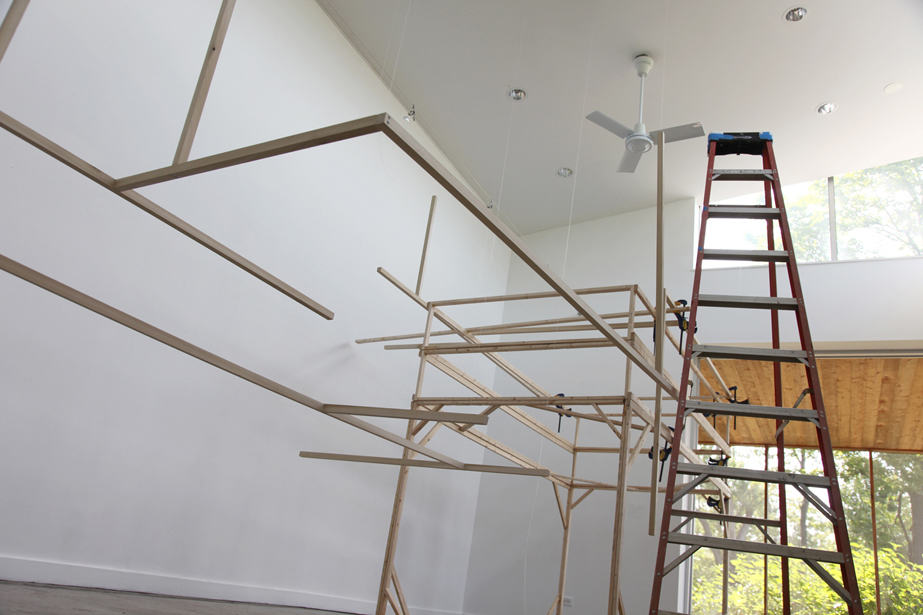 Installing branches inside the wooden framework. 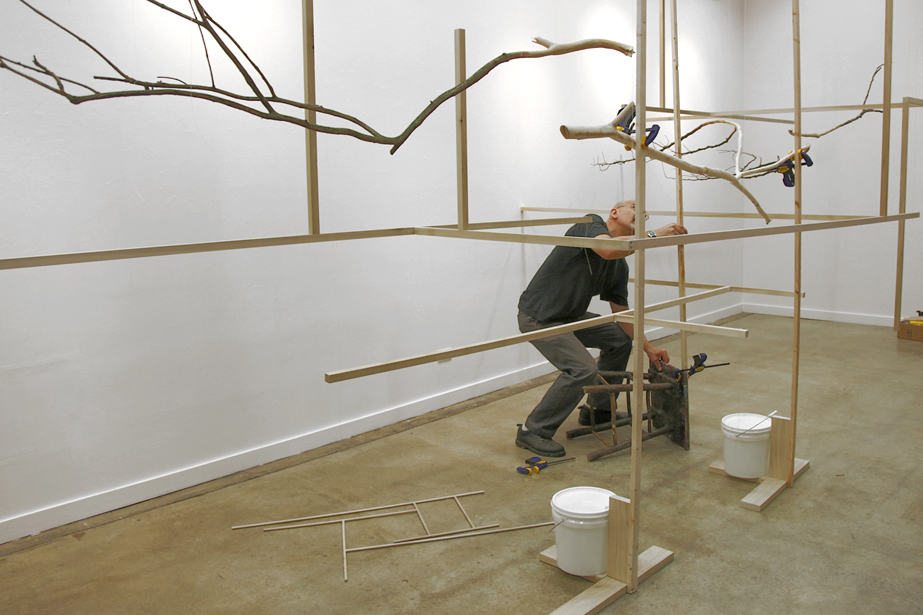 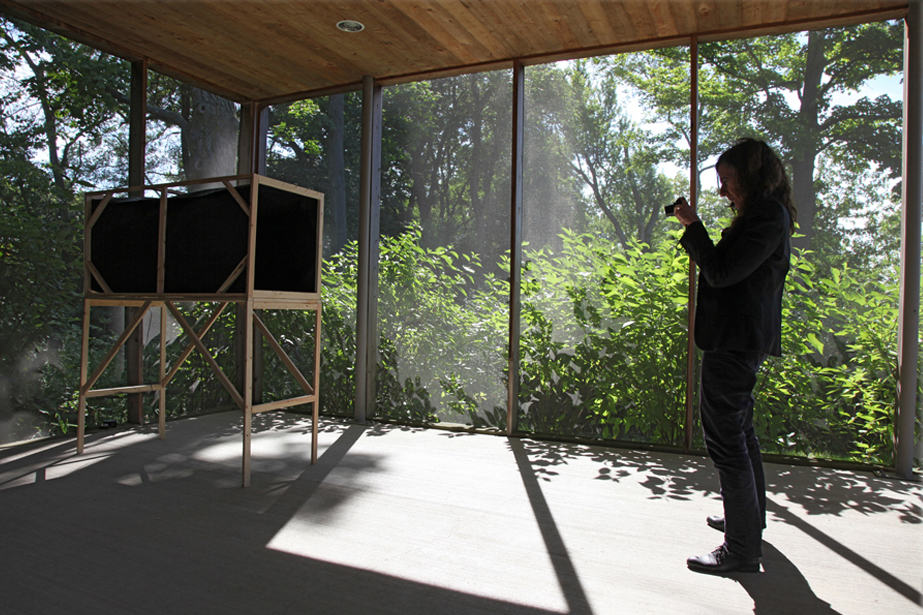 The video and surrounding outdoor environment.

Philip Hartigan, who writes for Hyperallergic, recently visited our studio at The Ragdale Foundation and blogged about it on his own site where he described our work as a “combination  of beauty and intellectual rigour”. Thanks Philip!